We adapted and produced a Berta Sola design for the children's space of the competition in Berlin.

Formula E was born in 2011 with the idea of adapting a competitive sport such as motor racing to the needs of the present. The idea was to make it sustainable through a basic and essential premise: the use of electric cars. The concept materialized in 2014 and has now become a global entertainment brand linked to less wear and tear on the planet. This year, already consolidated with 11 teams and 22 drivers on the grill, have once again had the usual supervision of the agency Gil und Weingärtneren this example of sustainable event design. And they have called Cartonlab to materialize their ‘kids zone’ in the appointment of the airport of Tempelhof (Berlin). 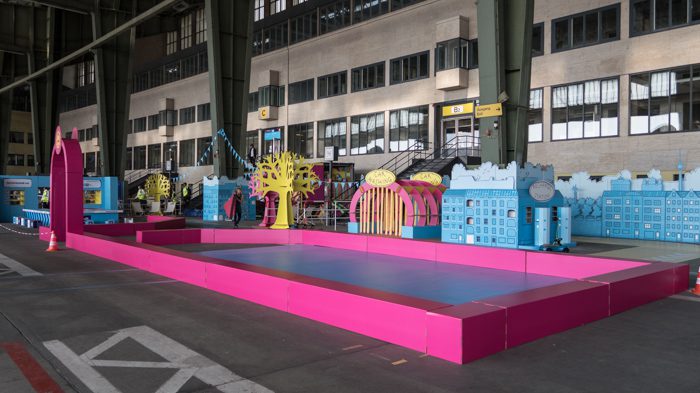 General view of the decorated space

Designed by architect Berta Sola and located in an area of the competition grounds dedicated to meals, rest and other leisure activities, our space was aimed primarily at the youngest. A play area surrounded, as is usual in these cases, by sponsoring brands and various claims for attendees. 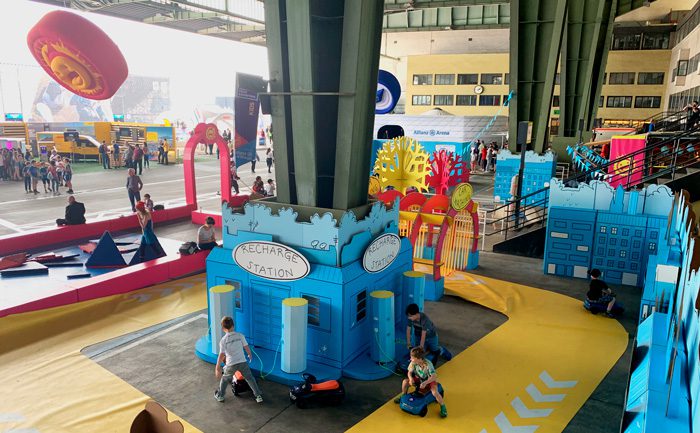 The playground, seen from above

Cartonlab’s work has consisted of advising, structuring and producing cardboard constructions for this example of sustainable event design. In this way, a multipurpose space is created, distributed in several satellite zones around the children’s race track.

Nearly 300 EB corrugated sheets, most of them printed, have been used for this project. The basic colours used (magenta, yellow and cyan) are the official colours of Formula E. The print on the material incorporated the illustrations designed by Berta Sola with urban references to Berlin. 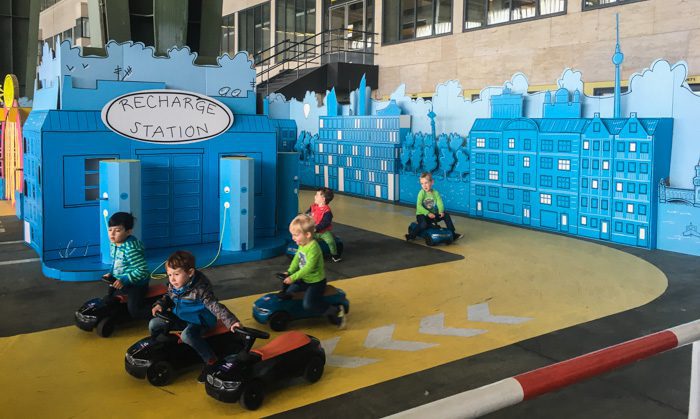 The children did not stop playing on the race track. Photo: Berta Sola

The racing track, the heart of the fun in the playground

It is always said that children imitate the behaviour of older people in their own way. In this case they had it easy, since their Formula E was created to measure. Simulating electric competition cars, the participants had at their disposal small vehicles with which to compete in game mode with their friends. The circuit had several key points worth stopping at. 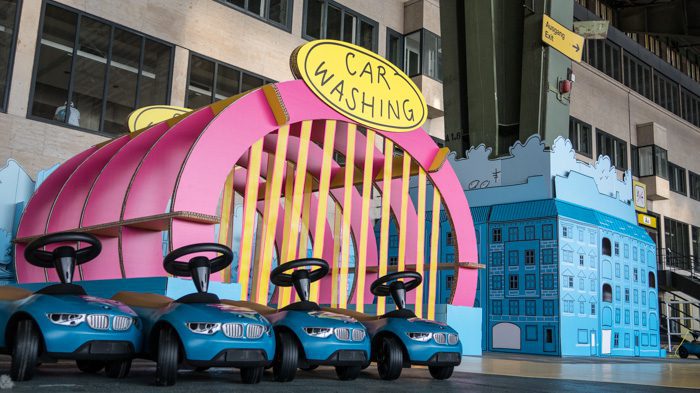 The car wash, interactive and focus of attention of the attendees

A large yellow cardboard poster printed the legend ‘car washing’ as a welcome to the laundry, one of the star areas of the event. With beehive cardboard arches printed on a striking magenta and canvas ribbons also printed as a curtain, this place provided great interaction, serving as a reference step each turn of the circuit. 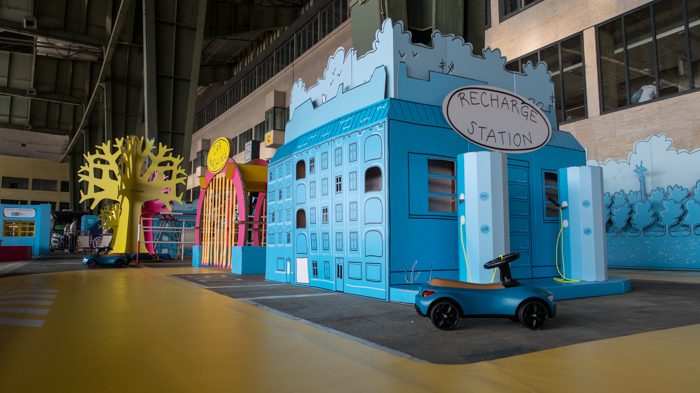 In addition to being clean, the electric car must always be charged, even if it is a simulation. For this, the recharge station was built, which represented in cardboard a station with four recharging points that was also widely used by small competitors. 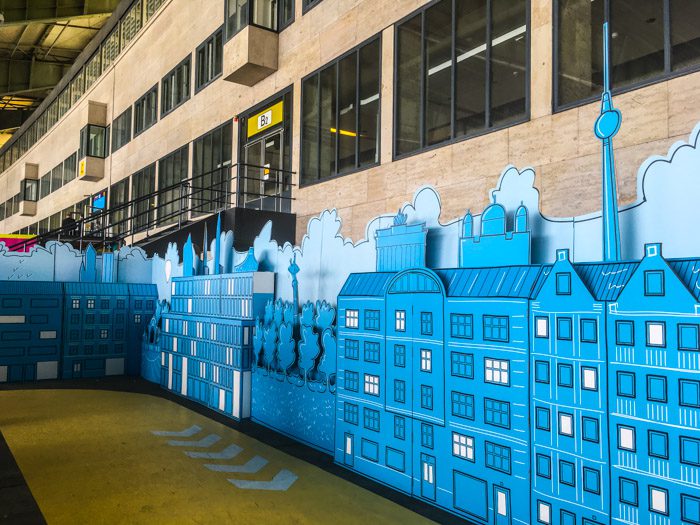 The dies and illustrations of the pieces were a fundamental part of the design. Photo: Berta Sola

The entire cardboard environment of the race track was stamped representing both urban vegetation and typical Berlin buildings, including such well-known monuments as the Brandenburg Gate or the Alexanderplatz Tower. Berta Sola’s illustrations, full of essential details for the visual representation of the city, were fundamental.

The children’s area was very crowded at all times. Photo: Berta Sola

Another of the spaces created for the game was the soft court. A large enclosure closed by a perimeter bench that allowed the rest of the elderly without neglecting the vigilance of the youngest. A safe place for the game, given the soft ground conditions and the constant proximity of adults. 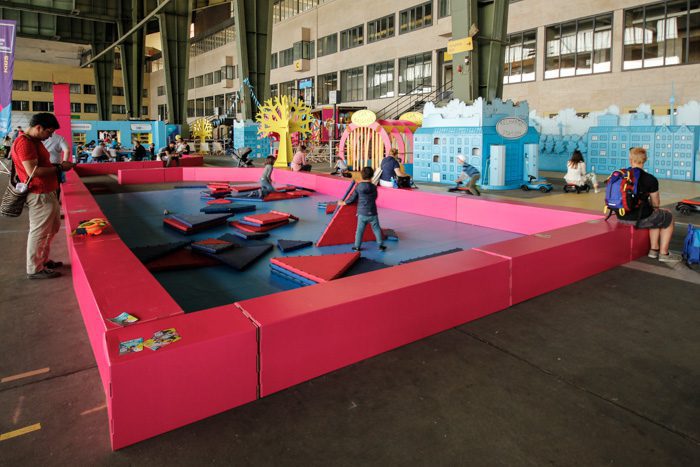 A detail to highlight in the structure of this space is the arch where the perimeter bench ends. It serves as an aesthetic resource but above it acts as the entrance door to the enclosure. 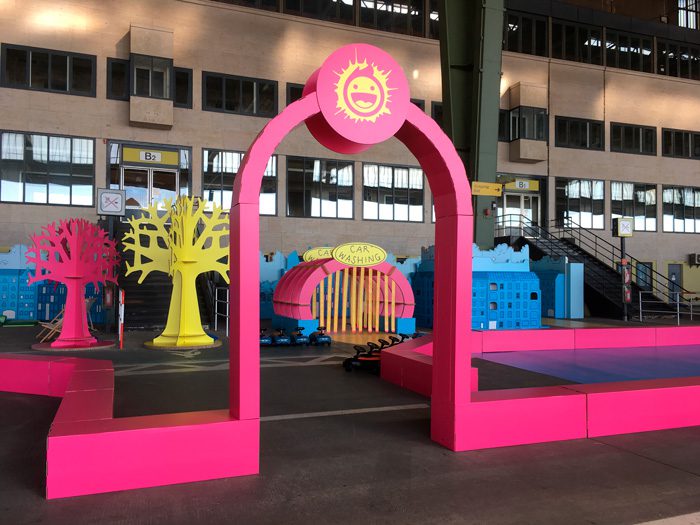 The entrance arch connects directly with the perimeter bench of the soft court.

Workshops and interactive activities with own space

Another of the most enjoyed places in the playground was the one dedicated to the workshops and various activities that the Fischer Technik brand had organized. It is a brand dedicated mainly to building games. For the development of its activity two main elements were produced: a facade with windows and access door and a large u-shaped table. 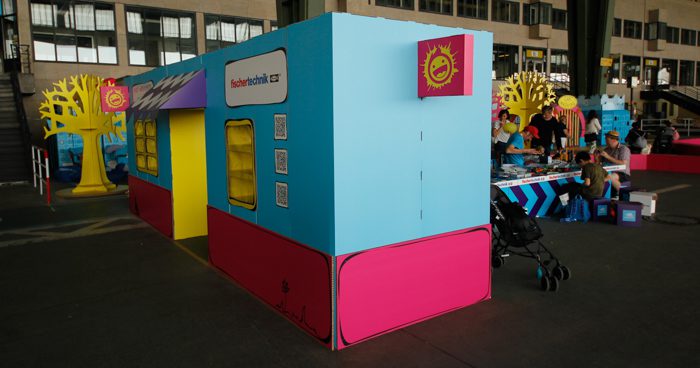 The ensemble was completed with the usual Cartonlab stools. To personalize them, they were printed with the corporate colors and logos of the brand and Formula E. As for the usual products used in our projects, we also found the trees that decorated the playground. In this case we produced them with honeycomb cardboard printed in color, using the tones proposed in the design we have already mentioned. 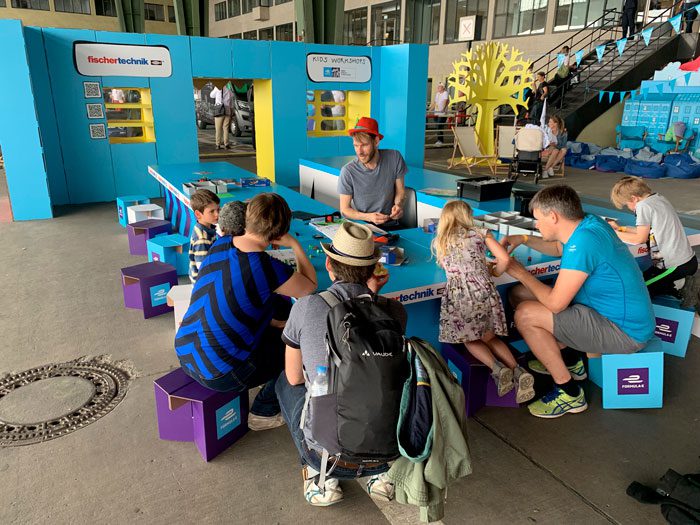 The construction games workshop had a made-to-measure space made of cardboard.

One of the modules of the play area, located in a truck trailer next to the children’s circuit, had a rest area on the outside flanked by elements similar to the rest of its environment. The idea was to integrate everything in the same design, achieving a homogeneous aesthetics with the rest of the spaces. 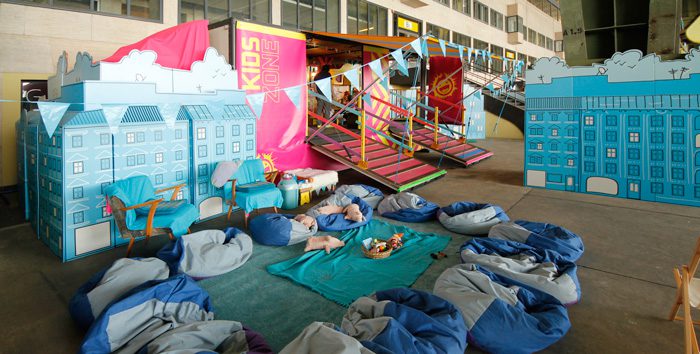 The rest area, perfectly integrated into the design for a sustainable event.