An original exhibition of craftsmanship with structural production of Cartonlab

Production of parts and structure of four architectural lamps

La Cidade Da Cultura de Santiago de Compostela is a spectacular architectural complex designed by Peter Eisenman and located on Mount Gaiás. One of its most important constructions takes its name from it: the Centro Gaiás Museum. Its 6,600 m2 of exhibition area is ready to host several exhibitions at the same time, but the protagonism during these months will reside in one in particular. Pensar coas mans. Cestería, cerámica e xoiería de Galicia, curated by Verónica Santos, is a journey through time in search of the roots of Galician craftsmanship. 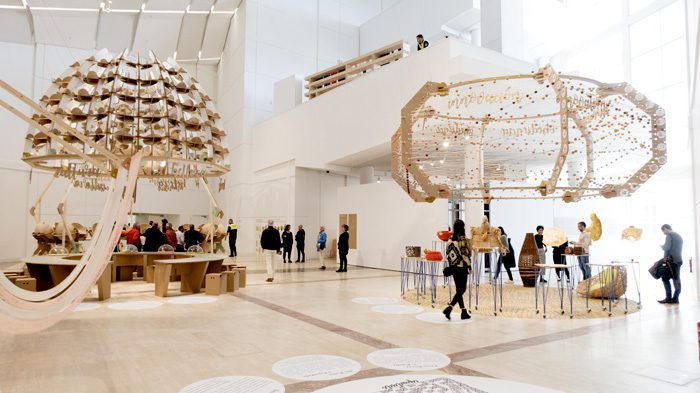 In spite of the retrospective look, it can be said that these three historical craft specialities (basketry, ceramics and jewellery) are going through a good time. They arouse interest, even international, but their evolution and survival is not assured without anchoring them well to the present. They are an indissoluble part of Galicia’s identity and a renewed focus on spreading its truths projects them into the future. That is where the format designed for this exhibition comes into play, the fruit of the work of the renowned architect Izaskun Chinchilla. 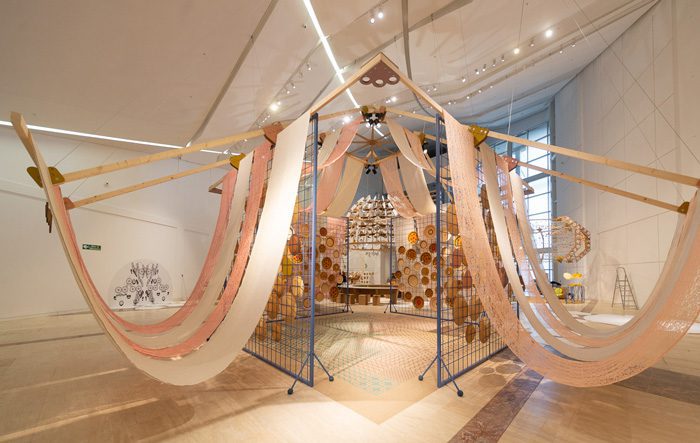 The Platos lamp has pieces designed by O Rulo, a reference craftsman in Buño.

It is estimated that some 5,000 people work in the craft sector in Galicia and that there are 635 workshops that sell their products under the brand Artesanía de Galicia. The exhibition goes back to prehistory to begin its journey through the artisan chronology of the area.

Lámpara Cestas, with basketwork of cock in wood of chestnut tree of Enrique Táboas, last cesteiro of this discipline.

It arrives at the present time, focusing on the mentioned internationalization. Names such as Ojea Studio, Cerámica Suve or Madriguera Workshop in the framework of ceramics for haute cuisine and decoration stand out for breaking frontiers. Also Idoia Cuesta, whose basketwork has aroused the interest of brands as powerful as Loewe.

A referential essay on reinterpreted architecture

Inspired by the 7 architectural lamps from John Ruskin’s essay, Izaskun Chinchilla has designed four large structures that will form the backbone of the exhibition. Designed as an artistic installation, they are exuberant in terms of aesthetics and sustainxdc able in terms of the material used. It is at this point that he entered the Cartonlab project, taking charge of the production of all the lamps. 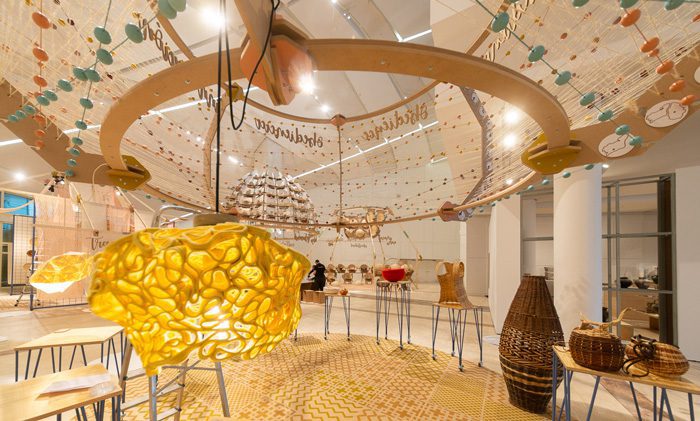 Lámpara Hilos, made of wood to support the tension of the original interwoven, with corpóreos in cardboard.

Baskets, Plates, Threads and Mirrors are the names of the four lamps built. The first two have been placed totally hung and the rest partially, with some elements supported. An original format to house the 250 pieces resulting from the collaboration of 65 artisans and various activities programmed around them. Here we can see the video that the Cidade da Cultura broadcast on the assembly of the exhibition.

Structure of cardboard and wood produced in Cartonlab

The pieces, designed in cardboard and wood, have been solved by means of simple assemblies and tongue-and-groove joints, using screws and carpentry tools. For the safety of the structures in cardboard, a pre-gluing of the pieces has been carried out to create more resistant constructive elements. 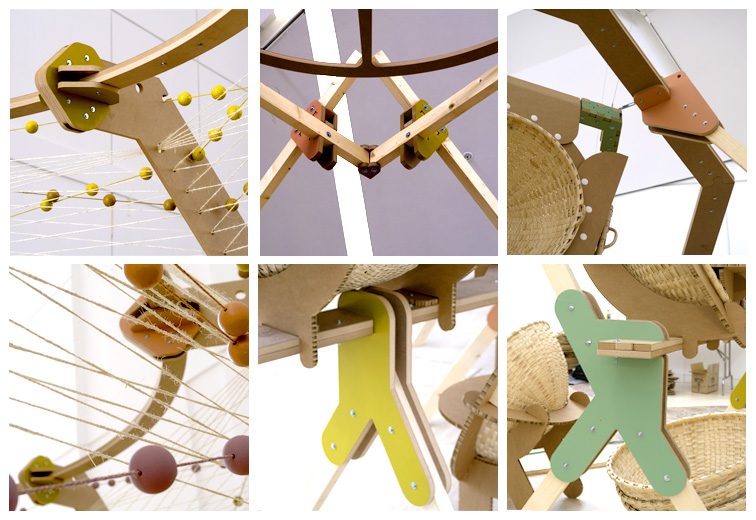 The parts of the process that required the use of cardboard were produced in various formats. We used 4.6 mm thick EB kraft and 7 mm BC kraft corrugated board. We also used Kraft Honeycomb and 15 mm thick white. It was applied both in pieces of lamps and in the complementary furniture that these included, such as tables or stools. 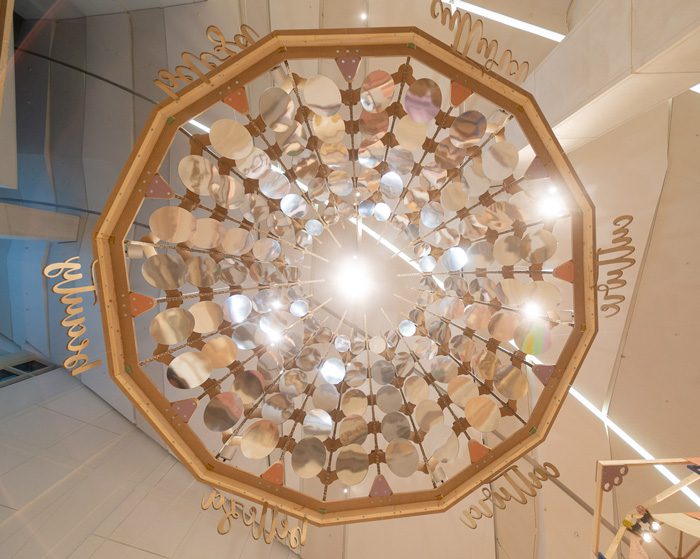 The spectacular result of the interior of the Mirrors lamp, which will host workshops, talks and demonstrations.

As for the wood, a milling machine was in charge of cutting the designs, which were painted, tested and properly classified in the workshop of Cartonlab. 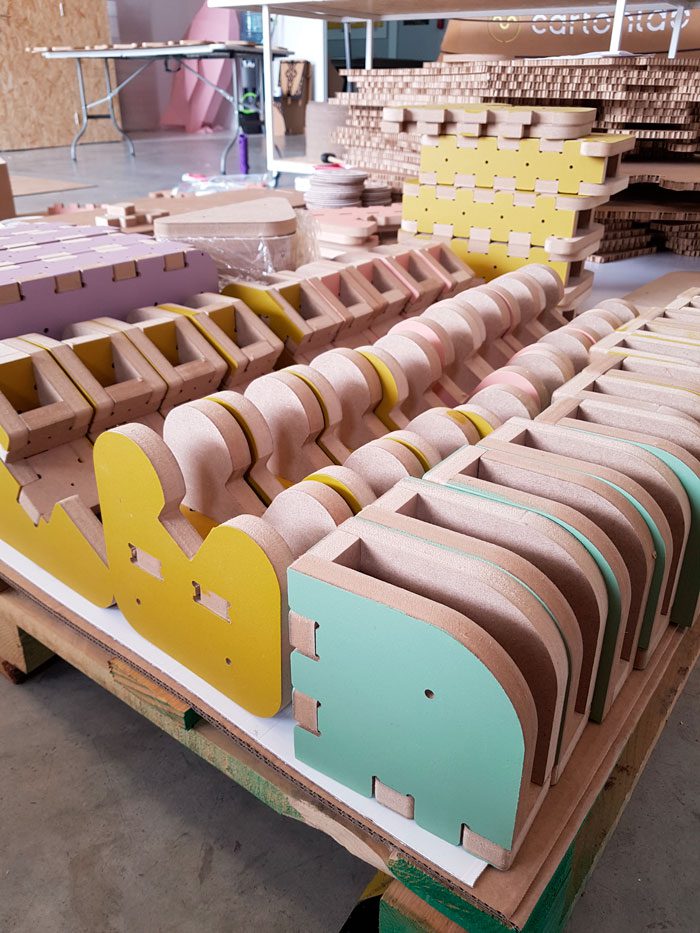 The parts used for assembly, ready for packing and shipping

A large group of professionals, with the fundamental contribution of the company Daexga, was in charge of the final assembly of the structures under the supervision of the architect Izaskun Chinchilla and the designer of Cartonlab responsible for the project, Sergio Morales. The result, once the handicraft pieces were included, has generated a lot of interest among those attending the exhibition. 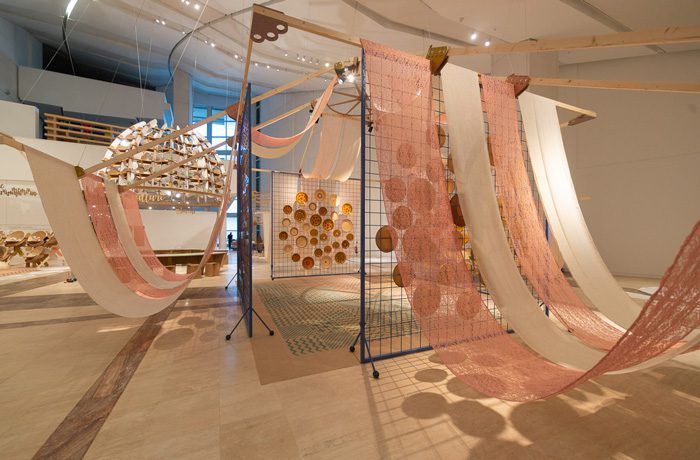 Detail of one of the corners leading to the lamp Plates

In this video we have made you can learn a little more about the process since it began in our workshop in Murcia.

A crowded inauguration and with good reception of the lamps

Many people were able to enjoy the inauguration of the work done, which will be on display until 8 September at the Gaiás Museum. Among them, public representatives such as the Minister of Culture and Tourism, Román Rodríguez or the Minister of Economy, Business and Industry, Francisco Conde. Both praised the innovative capacity of the artisans and specifically Conde thanked the Fundación Artesanía de Galicia for its collaboration. The Secretary General for Equality, Susana López, highlighted the important role of Galician women in the craft guild from its origins, understanding its diversifying value for the local economy. 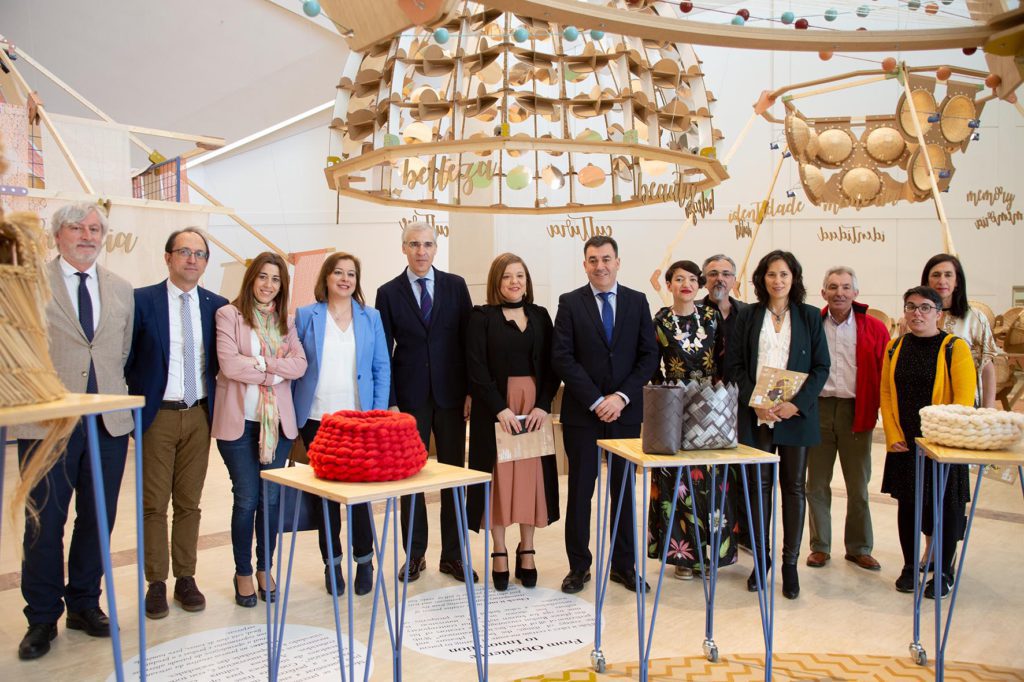 The Minister of Culture and Tourism, Román Rodríguez, the Minister of Economy, Employment and Industry, Francisco Conde and the Secretary General for Equality, Susana López, together with several other persons in charge of the exhibition as Izaskun Chinchilla. Photo: Xoán Crespo

Exhibition holders: Made in Alicante