The concept of a responsible city with energy management is becoming more and more important for the average citizen of the so-called developed countries, which in turn are the largest consumers of resources. The company Services Industriels de Genève (SIG) manages various types of energy in the prosperous Swiss city.

Romain, Emma and Arantza, by Stojan Voumard, in front of the die-cut entrance door.

Pulling the aforementioned conceptual thread and associating it with a smiling city, they organized an informative exhibition that aims to raise awareness while informing about their services. The communication agency Stojan Voumard has been in charge of managing it, relying on Cartonlab’s experience in the design of international exhibitions to materialize the project.

In this combination of spaces, the volumetric game of the exhibition is very well appreciated.

GIS provides several services in the city of Geneva. They are responsible for the supply of water, gas, electricity and thermal energy. Together with this, the exhibition had to show its concept of an intelligent city that smiles into the future through sustainability and technological innovation. In this way, several physical and thematic zones were created, surrounding a central part. 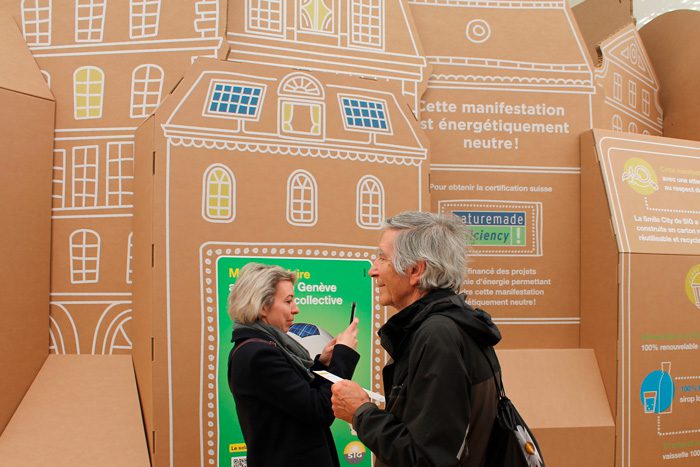 Attendees were very receptive to the eye-catching shapes of the exhibiting modules.

We find one dedicated to geothermal energy and the lake, another more corporate that talks about the company itself, one more dedicated to water and its use in the city and another to solar energy. The local fauna and flora also have their place in the exhibition. There is also a space that delves into technology as an energy-saving tool and another, located in an annex to the tent, dedicated to street art. 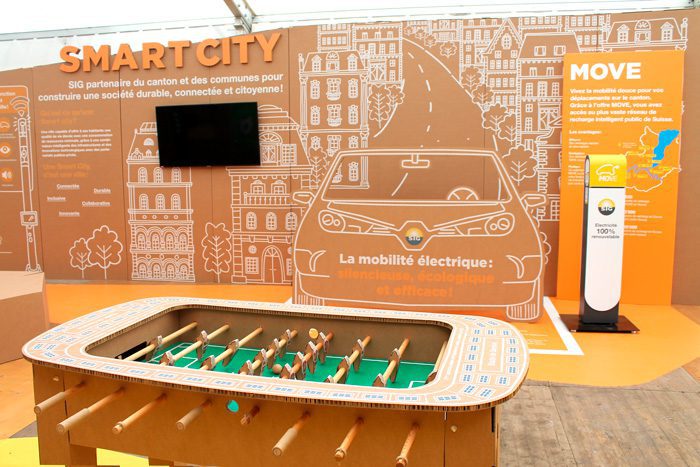 Tips for an intelligent city in the perimeter exhibition

The perimetral exhibition, an informative circuit

Through linked rear modules, playing with the drawing of the upper part that traces slight variations, the information is distributed throughout the exhibition perimeter. The material used for this structure is 7 mm thick BC corrugated cardboard in kraft finish. The height of the walls generated varies between 2.5 and 3 metres depending on the area. The information for the public is printed mainly in white ink (something unusual to highlight in this type of work) and with some concepts highlighted in colours. 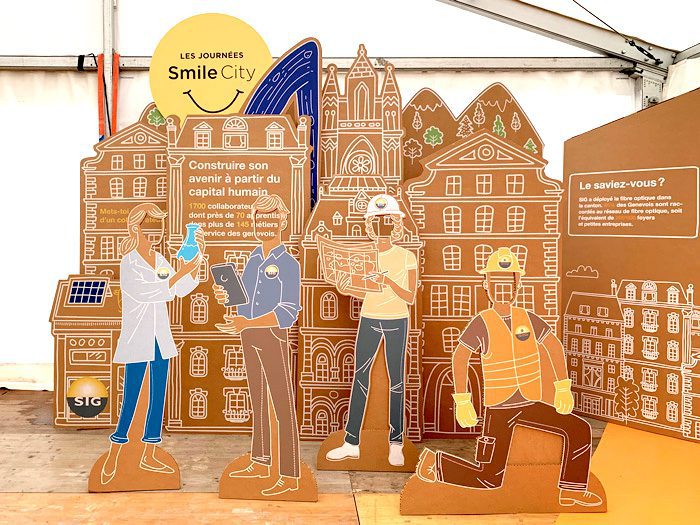 An international exhibition design with photocall already has a part of the interactivity solved.

The photocall was one of the busiest places in the perimeter exhibition. Interactivity always works, in this case we used die-cut figures that represented different trades linked to the usual work of SIG.

The city of Geneva in the centre of the exhibition space

It is precisely in the central part of the exhibition where the simulation of the city literally acquires greater relief.  It is not only represented by the profile of the structural composition, but also by volumetric effects. The terminations of the modules, in the form of stamped buildings, required the use of 15 mm thick honeycomb cardboard, in kraft finish and also printed like the rest of the pieces. 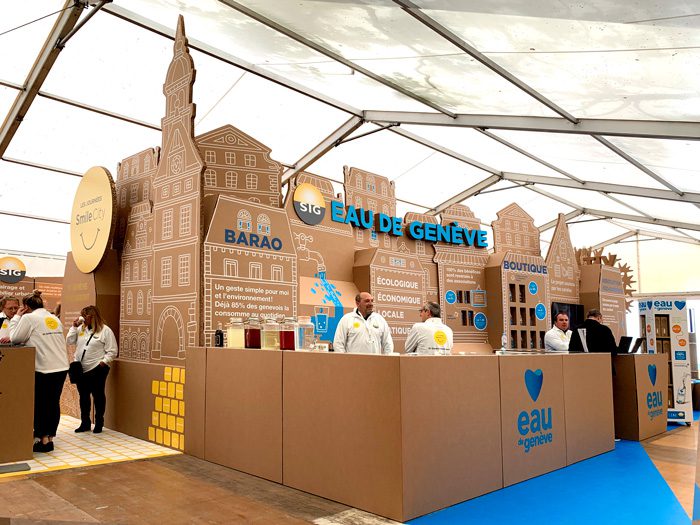 The Eau de Geneve stand, one of the most eye-catching

At some points they can even reach 5 metres in height. The international exhibition design approach with which we work, linked to cardboard, allows us to lift large heights, achieving structural solidity with very light materials. 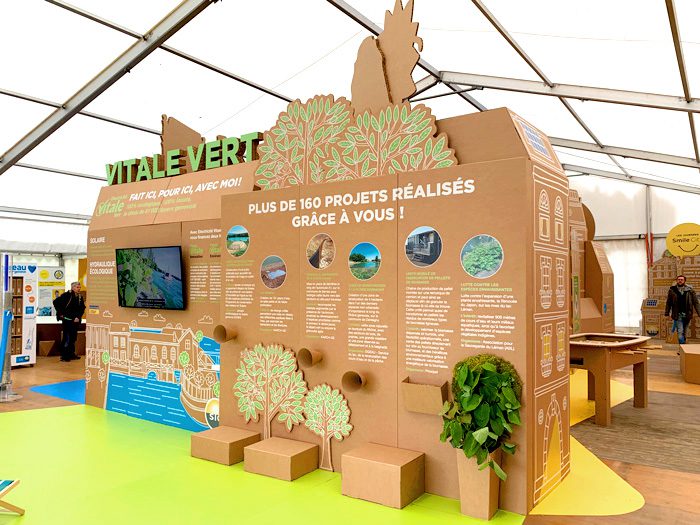 The space dedicated to fauna and flora includes plants and even loudspeakers emitting animal sounds.

The design, proposed structurally by Cartonlab, was very well illustrated by Stojan Voumard. In addition to the texts full of interesting information, the striking illustrations that accompany them shine by themselves, representing everyday scenes and maintaining a common thread that extends through all the pieces: the city of Geneva. we find numerous representations of real buildings, thus highlighting the local architecture with small licenses that allows it to be shown in drawings. 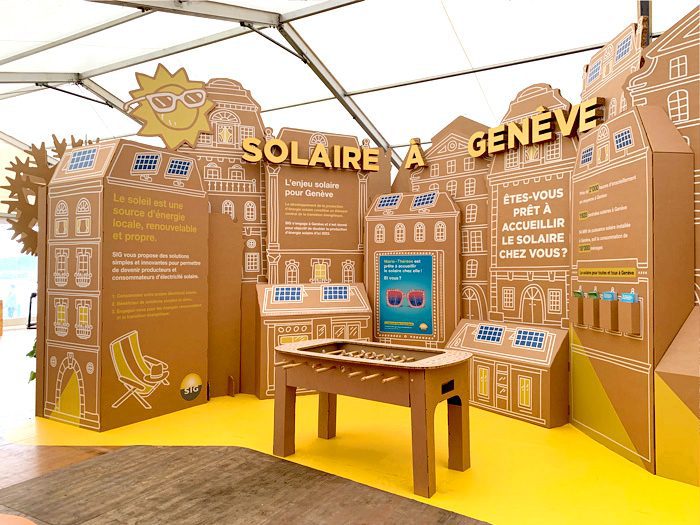 Space dedicated to solar energy, with table football included for the leisure of visitors.

An exhibition in cardboard with a versatile structure

Our approach when starting to design a project usually involves total adaptation to the client’s needs. Thus, we combine structures and furniture made to measure with other common elements in our work. In this exhibition, for example, we find a variation of our Faceta counter, as well as several stools of the same family, in adult and child size. The faceted finish is a common resource in our designs. 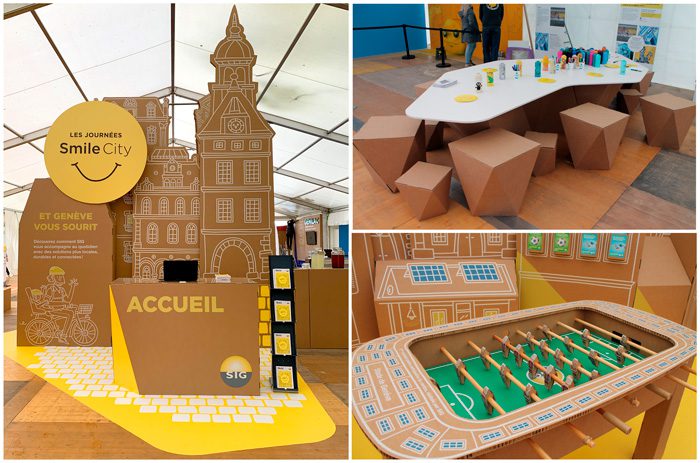 Several auxiliary elements to the general structure that make the difference

A good example of what we are talking about is the table designed for this occasion, dedicated to street art activities. Its outer layer, in which its geometric folds stand out, is produced in corrugated cardboard of double microchannel in kraft of 3.6 mm thickness, which gives the piece a good folding capacity.

The upper part is reinforced with a phenolic wood board with a white finish and edging. Using the same concept and materials, a children’s table was also designed and produced that included a decorative tree, another of the usual Cartonlab pieces. 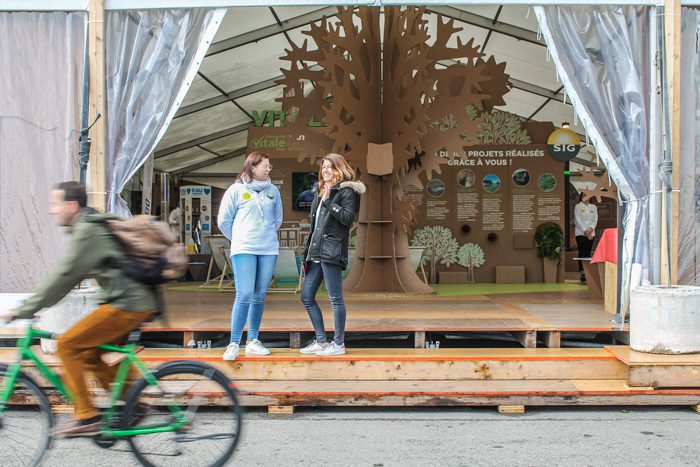 The giant cardboard tree draws attention from outside the exhibition.

Precisely one giant tree is another of the striking auxiliary elements of this exhibition. Situated next to one of the entrances and produced in honeycomb with kraft finish, this decorative element has a height of 4m.

Two workers of Smile City enjoying a moment of rest in the foosball table.

Another novelty to highlight in this exhibition was to include a cardboard table football dedicated to the entertainment of attendees and workers of Smile City. Of smaller dimensions than one to the use, it has a great playability and is very light to transport from one place to the other of the enclosure.

Some examples of design of similar international exhibitions

Both in the international scope and in the formal and creative approach of our projects, Cartonlab has several examples that resemble the exhibition mounted in Geneva. In the 2018 edition of URBACT, in Lisbon, we took charge of all the design and production of the space of this international meeting that deals with the adequate growth of cities. Detail of the cardboard neighborhood made for the III MeetingConlaEMD Within the work done for the Institute of Foreign Trade of Spain, ICEX, we can mention our presence at the Smart City fair in Barcelona, dedicated to the challenges to be met by cities in terms of sustainability. 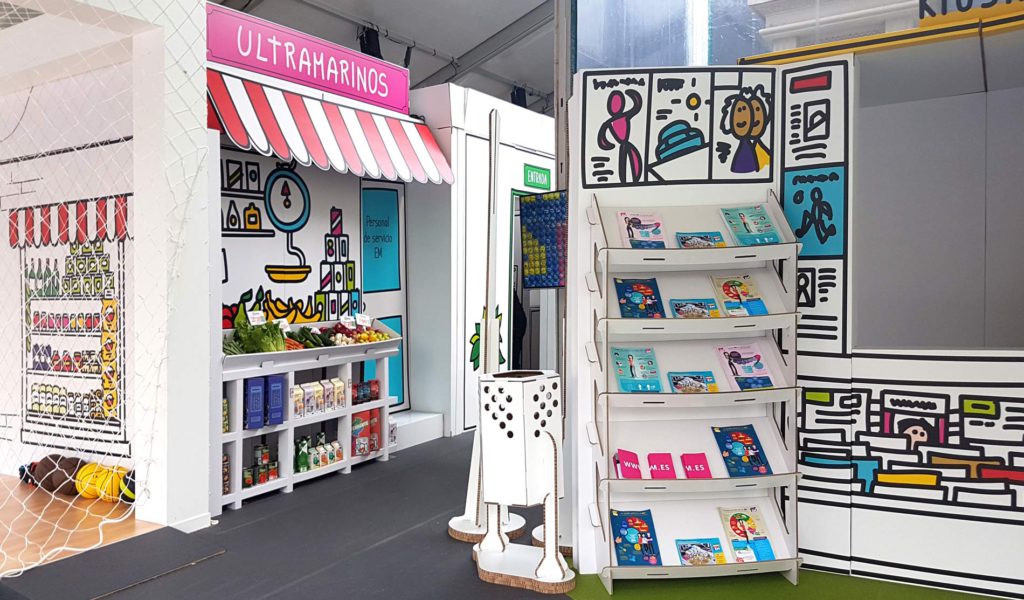 In this context of looking to the future, some time ago we did the exercise of reproducing the Puerta del Sol in Madrid to scale as the setting for Piensa Sol, a competition of ideas on the fate of that urban environment. Perhaps a little further away in the subject matter, but very close in aesthetics, we find ourselves with the work done for the III Encuentro con la Esclerosis Multiple (III Encounter with Multiple Sclerosis). In this project we used printed cardboard with illustrations and die-cut as a representation of a neighborhood dedicated to awareness.

Exhibition holders: Made in Alicante