Design and production of set for 'Cuando ya no esté' (4th season), in Movistar Plus

There was much expectation prior to its premiere and it has not disappointed. It is now available in Movistar + the fourth season of Cuando ya no esté, an interesting programme presented by Iñaki Gabilondo. His usual concerns continue to beat strongly, vertebrating the concept of what will be our future as a society in the medium term. In addition, they have added some variables that reinforce the theme. Immortality, internet, food or education will be the issues to deal with, with the incorporation of young scientists, youtubers and comedians to the new concept of production. All this also requires a renewal of the approach of scenography design for television. 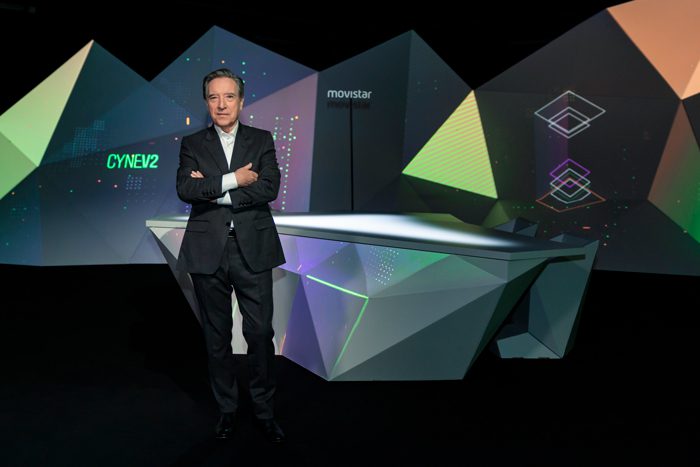 La Caña Brothers is a versatile production company with a rising prestige, accustomed to giving a twist to formats. They were already responsible for ‘Cuando ya no esté’ but, as it is a format with an eye on the future, it seems that its context was crying out for the renovation of the set. That’s where Cartonlab ended up as a company, proposing the structural design and production of the same as a support on which to project. This video narrates the process in synthesised form.

The idea is based on a futuristic aesthetic, but always functional.  Through six projection cannons and the technique of video mapping a great visual dynamism is provoked that opens innumerable possibilities. Sometimes merely decorative, other times making explicit visual support to what is said, the work done in this sense generates an undeniable impact at first sight. 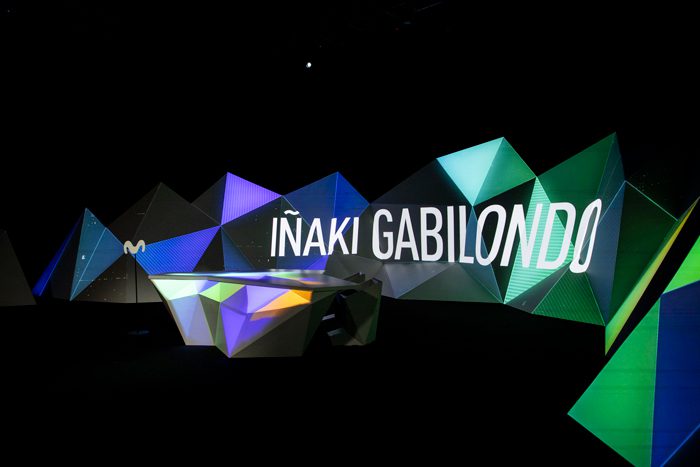 The polygonal forms of the set, ideal for video mapping. Photo: LCB

Romera Diseño e Infografía and Paz Pérez Sanz were responsible for the designs projected onto the set. This is the first time that video mapping has been introduced in a scenography design for television in Spain. Furthermore, as the channel itself pointed out at the official presentation of the programme, it is a sustainable set. In fact, it is designed to be reusable, once finished the recording is disassembled and stored, ready for possible new use. 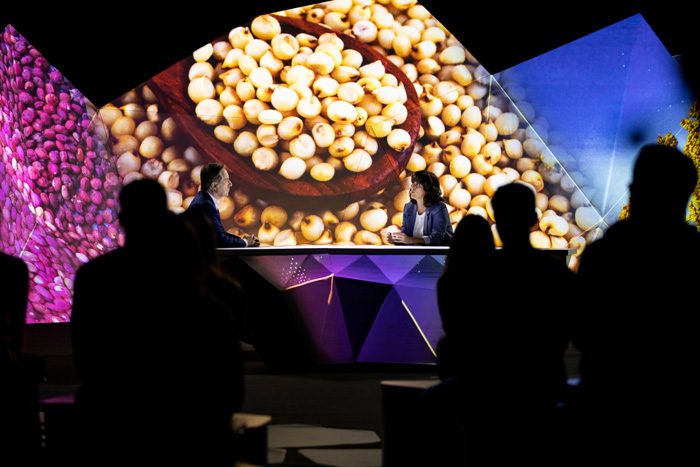 The video mapping on cardboard generated a great result when illustrating the interviews. Photo: LCB

A decorative design for television with a cardboard structure

The first thing that catches the attention of the set are the polygonal breaks in the back of the set. It is a great piece that practically occupies from side to side the background of the scene in each general shot. Being such a high structure, almost 4 m high, we had to think of a solid internal skeleton to support the weight. The structural parts of the interior were made of material thicker than the outer shell. 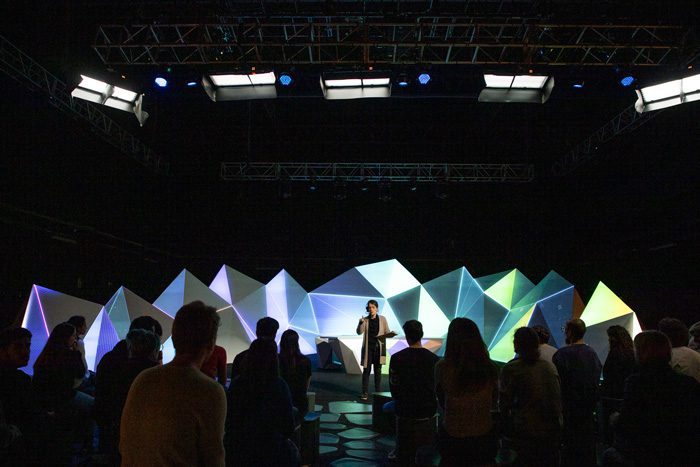 The regidora addressing the public, with the geometric decoration in the background. Photo: LCB

Two types of corrugated board were used: BC 7 mm thick for the internal ribs and EB 4.6 mm thick for the rear reinforcement pieces. On the outer cover we used 3.6 mm vinyl double micro cardboard in light grey. Its smaller thickness facilitated the numerous folds that generate the attractive forms on which the video mapping projects. Miguel Ángel Fernández has been the designer in charge of giving shape to all the work done by Cartonlab for this project. 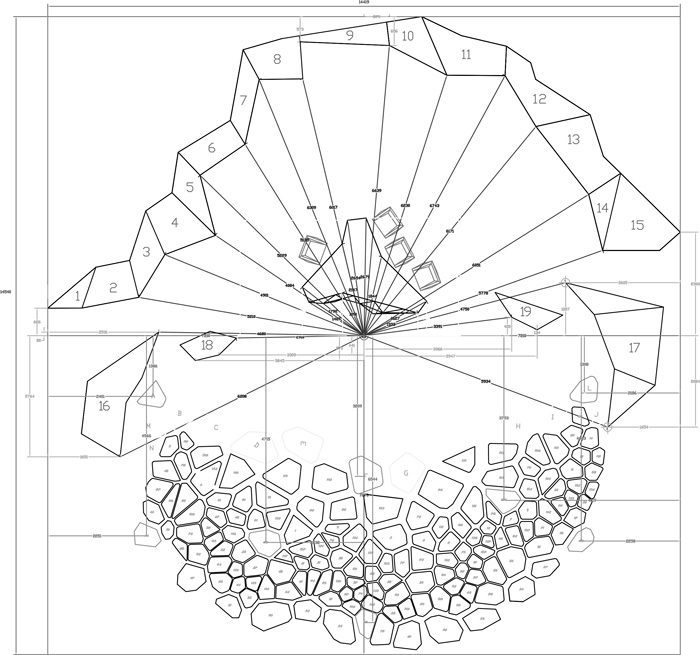 The table, also polygonal and ready for projection

The central table is produced following a similar process, with the same design philosophy. An internal BC structure and a double micro vinyl wrap-around cover. It is reinforced with a wooden board in its upper part with the same vinyl used for the whole project. It is a finish that gives strength to the whole and is also used to project on the surface. The set is completed with three stools specially designed for Iñaki Gabilondo and his guests, following the same design criteria and materials as the rest of the decoration. 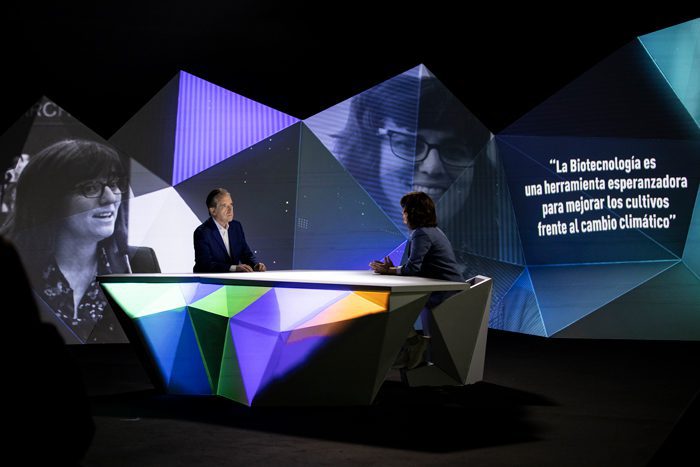 The table and the facetted stools, designed for the comfort of the presenter and guests. Photo: LCB

Graderío inspired by the geometry of nature

The stand consists of 151 pieces forming an original composition that makes good use of space and is very aesthetic in camera. It is based on the Voronoi Diagram, a geometric construction that serves to differentiate space in regions, forming a type of structure of which we can find examples in nature. Two types of elements were used for the composition: pvc pieces for the floor and stools. It is designed for a maximum capacity of 60 people. This is the number of stools available, which are divided into three types according to height: 30 40 and 50 cm. They are distributed to generate a certain topography in which some people do not cover others during the recording. 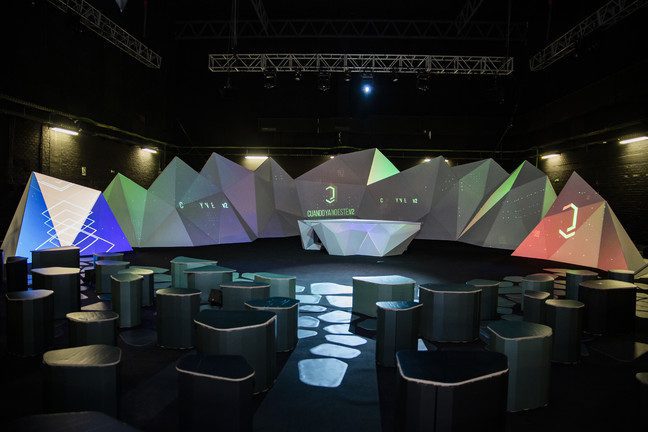 Decorated with the grandstand in the foreground. You can see the different heights of stools. Photo: LCB

They are also printed with colors that are part of the palette used for the image of the program. Specifically different shades of the same color, forming a gradient from the audience to the table. As for the shape of the stools, they are different from each other, an added challenge for the production that had a great final result. The rest of the pieces in the composition of the stands have a merely aesthetic function that completes the structure proposed in the design. 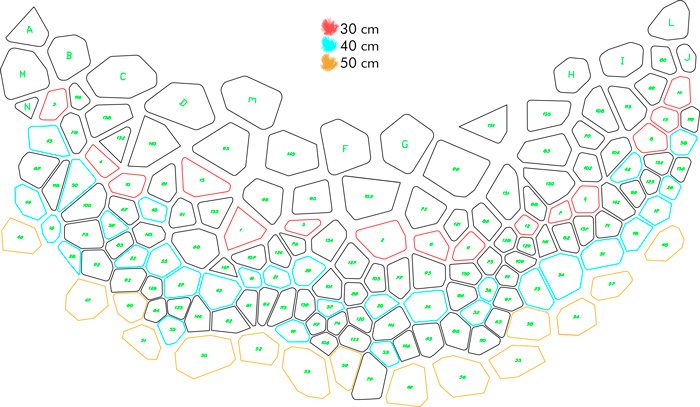 Little by little our trajectory is expanding and self-referential winks are inevitable. In any case, a project like this has a lot of novelty for us although it does not escape from the influences. One of the clearest is in the stand that we made for the Icelandic drinks company Glacierfire. There we can clearly appreciate the facetted structure inspired by rocks and ice created for this occasion and that we have evolved, with many variations, adapting it to the project with La Caña Brothers. 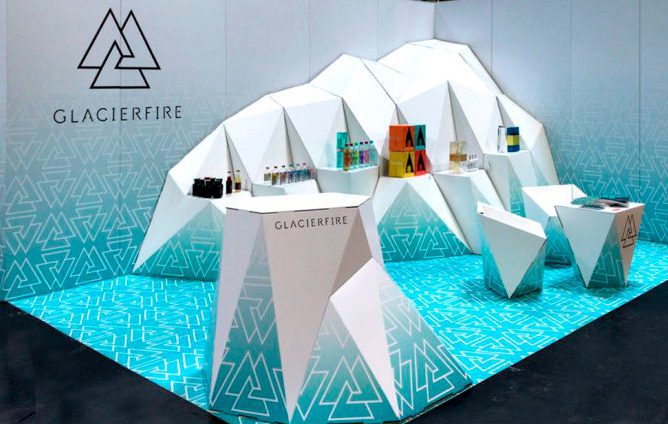 Technical needs have marked the structure of this design for a television set. Nor is it the first time that we have worked for the medium in question, if you take a look at our website you will find similar experiences for other television production companies. Also other examples of scenographies, more related to the scenic arts. Even in relation to the video mapping applied on cardboard, we have had some experience of formative character.

You can see here another example of scenography but for a sustainable event.

Interior design for hotel made of cardboard. Sub-Up Hostel.